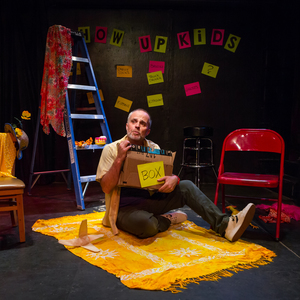 Following sold out runs in NYC, LA, and the UK, Peter Michael Marino's critically acclaimed "Show Up, Kids!” makes its Hopewell premiere! When the main attraction doesn’t show up, Pete enlists the kids to help create a comedy show from set to sound, plot to props, and costumes to characters. What could possibly go wrong? This entirely unique, improvised family show for kids 3-10 years old puts a comedic twist on the traditional kids’ show.

★★★★★ “A fantastic performance! Marino handles the unpredictability of working with children in an improvised environment with great skill and grace!”- Backstage on the Fringe

★★★★ “Hilarious! Marino knows what kids find funny. A show of this caliber is an opportunity to show up for!” - The Wee Review

“Fantastic fun! A one-man whirling dervish of energy, comic timing, physical agility, and out and out hilarity. The kids were absolutely mesmerized.” - The Front Row Center

“A great show with a mixture of songs, audience participation, crowd-sourced ideas, and a quick, witty performance!” - The Edinburgh Reporter