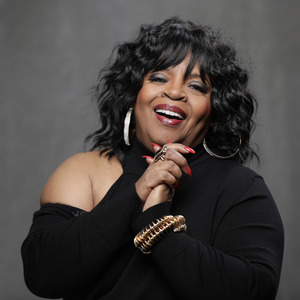 Join Sarah Dash as she shares stories from her friendship with Aretha Franklin and sings songs from Aretha's songbook.

Sarah Dash defines the word "legend." As an award-winning vocalist, songwriter, motivational speaker, educator, entrepreneur, and humanitarian, Sarah is a unique force whose voice has touched millions of listeners around the world. From co-founding Patti LaBelle & the Bluebelles and making history as a member of Labelle to becoming the very first Music Ambassador (2017) of Trenton, New Jersey, Sarah has blazed a trail in every facet of her remarkable career.

In between producing her one-woman stage shows, "Dash of Diva" and "Sarah: One Woman," Sarah brought her talent to several different projects. Having worked with a variety of acts like Living Colour, Nile Rodgers, Alice Cooper, The Marshall Tucker Band, The O'Jays, Wilson Pickett and Bo Diddley over the years, she toured and recorded with Keith Richards' X-Pensive Winos and appeared on the Rolling Stones' Steel Wheels (1989) album. She reunited with Patti and Nona for the #1 club hit "Turn It Out" (1995), received the Rhythm & Blues Foundation’s "Pioneer Award" in 1999, and recorded the Labelle reunion album Back to Now (2008), featuring productions by Lenny Kravitz, Wyclef Jean, and Kenny Gamble & Leon Huff. In 2017, the members of Labelle were inducted to the Philadelphia Music Alliance's Music Walk of Fame.

Building on a legacy that traces more than 50 years of music, Sarah Dash continues to be a "a chameleon of the most musical kind" (New York Beacon) who's remained "as vital and vibrant as ever" (Philadelphia Tribune) in her performances at celebrated venues like the Laurie Beechman Theater, Feinstein's/54 Below, and Joe's Pub at the Public Theater. In addition to co-producing and hosting the Trenton Makes Music Project, her two-year term as Trenton's Music Ambassador includes advocating for the expansion of performing arts while promoting the positive impact of music on the lives of Trenton residents. Through her constant evolution as an artist, it's a role she's mastered for more than five decades, using the power of her voice to both entertain and encourage her devoted listeners. Like the greatest music legends, there is truly no limit to the inspiration Sarah Dash brings to every note she sings.