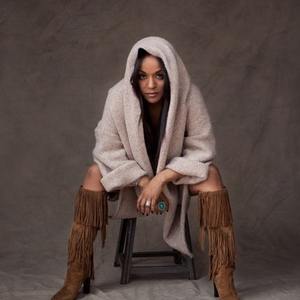 Special VIP Meet and Greet ticket upgrade available for $20! Package includes VIP access to soundcheck for and a photo op after soundcheck and before doors. Upgrade your ticket at check out.

Hopewell native Danielia Cotton closes her new record, The Mystery of Me, with a message of resilience. "The dark spots will appear," she sings on the title track. "Just remember, you're still here. "Cotton penned "The Mystery of Me"—a lovely ode to self-acceptance—in just one night. "I sat down and the song came, I was settling into that good place I’m al-right with the fact that there’s a few mysteries to life and to myself. I don’t think I always felt that way, but I do now." The new album's 10 tracks feature an eclectic mix of rock and soul, from the soaring "Set Me Free" to the deeply personal "Drink” and the upbeat "4 Ur Life," which pulls inspiration from classic Motown as well as Sly and the Family Stone, in this we find the Cotton coming to terms with her newfound happiness.The song’s carpe-diem message also makes it a call to arms for the younger generation in our current political climate, she adds. “I just feel like we need that right now. It's saying something that needs to be heard, but not in a way where you're like ‘goddamn.’ It's not throwing it in your face, but it's also like ‘this is it, the moment it changes.’ Right now, what we do now with everything that's going on, it will change everything. It will change how we are here now and possibly the future.”It’s a strikingly optimistic message, one that Cotton’s arrived at after enduring some incredibly difficult times—where she dropped into an abominable low. But The Mystery of Me sees the singer/songwriter rising from the ashes of that tumultuous period and finding a new healthier perspective. "This is sort of the album that's coming up to the other side," she says. "There was an EP released before it that was sort of the beginning of the emergence. I was just coming up for the first bit of air. This is me standing more solidly on the ground...It was just writing in a better headspace, mentally and physically."

Cotton believes The Mystery of Me accomplishes what she only hinted at with previous albums Small White Town and Rare Child, crediting her recent dedication to the piano with taking her to new creative heights.

"It gave me more vocabulary," she says. "And instead of coloring with seven colors, suddenly I had like 19 colors. My vocab expanded and woo, I was off to the races...It just opens up the door and there's a new way to say hello. It's like learning a new language and all of a sudden you can just say things completely different and the inflections are different. It's awesome."

It's telling that after so many years, the Hopewell, N.J. native—who first picked up a guitar at age 12, released her debut album in 2005 and has opened for the likes of Buddy Guy, Derek Trucks and Bon Jovi—is still looking for fresh ways to say hello to audiences. Though she's constantly evolving as an artist, Cotton's quick to point out that she's always managed to remain herself.

"I still stayed true to myself because to me, I had to keep redefining success along the way and decide what it is I truly wanted," she says. "Did I want adoration or did I want a certain level of artistry and acknowledgement from my peers versus fans? And I keep redefining and answering that question over and over again. I believe I’ve stayed true to who I was in the process, so that's a deep thing. I went the long route, but I wouldn't do it any other way. My first entertainment lawyer, Jaimie Roberts, always said 'if it comes quick, it doesn’t last.' If it’s a slow build, you’ll get there and you are much more likely to have longevity."

She's still here, and she's got no plans to leave.