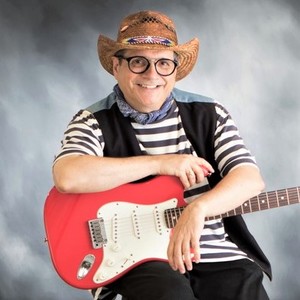 Grammy recipient Steve Pullara brings his popular Cool Beans Music ® to your family! Get ready for a really interactive children's family concert.  Steve Pullara's Cool Beans Music Concerts are considered among the top their genre. Bring your kids and grand-kids for a rollicking musical time through Steve's 20-plus years of award winning songs. They're guaranteed to put a smile on everybody's face. Put on your dancing shoes for a lively and upbeat show that your children will remember for a lifetime!

Steve Pullara is a Grammy Winning producer, multiple award winning, Philadelphia based New Jersey born singer/songwriter/artist. His musical roots go deep within many cultural traditions. In his nearly 30 years of musical concerts, you can hear influences from his Grandfather Giuseppe to Pete Seeger to Louis Prima. Often, in live performances, he blends a mix of drawing and singing that harken the days of the Gene London and the Sandy Becker TV shows from the 50's & 60's. Steve Pullara has many years of entertaining kids and families under his belt in the Philly area and nationally. He is comfortable with this niche and very at home with his audiences. Often, he has been seen entertaining on his TV show and at commercial and non commercial venues such as: large amphitheaters, zoos, township parks, schools, libraries, hospitals and festivals performing his talents. At these sites you can also view him in concert solo or with his band called: Steve Pullara and His Cool Beans Band. He's also entertained at the Comcast Center, on WXPN's Kids Corner, NBC's Children's Miracle Network Telethon, Give the Kids the World in Kissimmee, Florida, The American Lung Association and The March Of Dimes; putting smiles on faces and often helping them to raise money for their particular causes. Steve Pullara And Cool Beans Music® present award winning music. A good time is had by all!