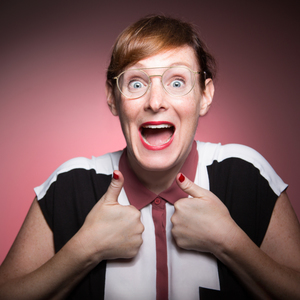 Jess Salomon is a Canadian comedian now based in New York. She was a 2017 StandUp NBC Finalist and had her stand up featured on SiriusXM’s “Raw Dog”.

Jess has written for the award-winning sketch comedy show “Baroness Von Sketch” (IFC/CBC) and her comedy has aired on television in Canada on the CBC and radio shows like SiriusXM’s “Canada Laughs” and CBC’s “LOL”. Jess is the regular host of “Dirty Laundry” at UCB (Hell’s Kitchen) Monday nights at 11pm. You can also catch her co-hosting The Lesbian Agenda at Union Hall in Brooklyn. She also performs as part of the comedy duo, The El-Salomon’s, with her wife Eman El-Husseini (@TheElSalomons).

Fun fact: before comedy Jess used to be a U.N. war crimes lawyer. The jury is still out on whether this was a good move.