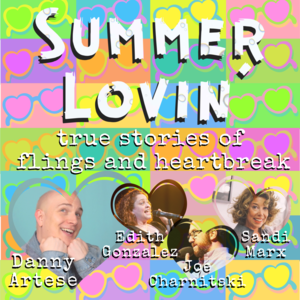 From camp crushes to learning that sometimes no amount of sunscreen can keep you from getting burned, join host Danny Artese and a trio of stellar storytellers for Summer Lovin', true stories of flings and heartbreak from some of the most hilarious and heartfelt storytellers in NYC. Tell me more, tell me more!

Sandi Marx is a 7-time Moth StorySLAM champion who performed her one-woman show "You'll Be Sorry" at The Tank in Brooklyn, NY. This past year, Sandi was featured on PBS's "Stories from the Stage" televised nationally and can be heard on countless podcasts including Risk! and Hot Mic with Dan Savage.

Joe Charnitski has been featured on The Moth Podcast and has performed at stages, bars, and living rooms throughout NYC. His solo show Joe Charnitski's Funeral was named by Theatre is Easy as a Best of Frigid Best Bet in the 2017 FRIGID Festival at The Kraine Theater.

Edith Gonzalez is an anthropologist and storyteller who has performed on shows including Story Collider, which features personal stories about science, Take Two Storytelling, and she is a 2-time SmutSlam champion.

Danny Artese hosts the storytelling series The Day I Should Have which includes a Q&A with storytellers after their stories because he believes that stories start conversations and encourages you to share your stories. He is a Moth GrandSLAM winner whose solo show Mama Said I'd Be Gay Like This was featured in The Tank's SoloWeek in 2016, and he curated their ProudAF storytelling festival in 2018.

Can't get enough of Storytelling and Comedy podcasts? Subscribe to our new storytelling podcast, This Really Happened...Storytelling at HT, now available on iTunes, Google Podcasts, Spotify, & Anchor! A new installment will be released each month.