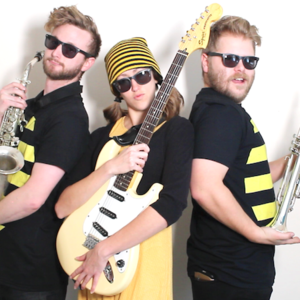 An indie pop-rock band for all insects and ages, Bee Parks and the Hornets perform high-energy concert parties that combine rockin’ music, puppetry and audience participation to inspire young people to get up and move — both with their feet and in their communities. With all-original songs that promote kindness, equality, self-confidence, social justice, environmental awareness and dancing your heart out, Bee Parks and the Hornets take audience members of all ages on a musical adventure that will open up spirits and imaginations.


Bee Parks and the Hornets is the creative endeavor of Brittany Parker, a Maine-based theatre and music maker. She started the band at the beginning of 2018 to empower young people and the adults who love them. Pulling from various musical inspirations, including Motown, the Beach Boys, and 90's alt rock, Brittany begin writing a series of songs that included stories of environmentalism, social justice, equality, self-confidence, and loving your neighbor. She immediately reached out to her friends and colleagues, Carl Ferm and Joey Dupuis, to join the band. They also contributed songs and musical ideas, culminating in a 60-minute theatrical show with puppets and audience interaction. More musicians joined the team to create a roster of Hornets playing a variety of instruments, including trumpet, saxophone, electric guitar, keyboard, ukulele, bass guitar, and drumset (see gallery below). Within a year, Bee Parks and the Hornets performed over 30 shows and released their debut EP, Bee Yourself.