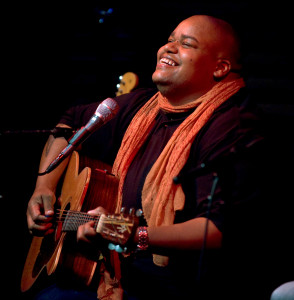 Over nearly 30 years, Reagon has collaborated with top innovators across a wide spectrum of the entertainment field. Since Lenny Kravitz chose her, straight out of college, to open for him on his first world tour, she has gone on to share stages with notable colleagues such as Nona Hendryx, Elvis Costello, Ani DiFranco, Pete Seeger, Dar Williams, Lizz Wright, Me’shell NdegéOcello and Marc Anthony Thompson (aka Chocolate Genius). Her performances with her mother, Bernice Johnson Reagon–civil rights activist and founder of the a cappella group, Sweet Honey in the Rock–are legendary.

Toshi Reagon composed and served as musical director for Bones and Ash: A Gilda Story (1995), a production by the acclaimed Urban Bush Women dance troupe. She has also scored dance works by LAVA (most recently, we become in 2008) and by the Jane Comfort Dance Company (Asphalt and Underground River). Her musical work has been featured in film (The Secret Life of Bees) and television (PBS/WGBH’s Africans in America, The L Word, Crossing Jordan, House and HBO’s award-winning Beah: A Black Woman Speaks, produced by Jonathan Demme and LisaGay Hamilton). She collaborated, as conductor, musician and instrumental composer/arranger, with director Robert Wilson and with Bernice Johnson Reagon on a Gustave Flaubert-inspired opera, The Temptation of St. Anthony (2003), which toured throughout Europe.

Poet and playwright Carl Hancock Rux tapped Reagon as one of the producers for his Rux Revue album. She also produced Casselberry DuPree’s Hot Corn in the Fire and Gina Breedlove’s Open Heart. She served as producer or co-producer on four CDs for Sweet Honey in the Rock–In This Land (1995), Still On The Journey (1993), Sacred Ground (1996) and The Women Gather (2003). She has written songs for Lizz Wright’s Dreaming Wide Awake (2005) and co-wrote and plays on several songs on Wright’s The Orchard (2008). She is currently working on a new CD with Wright.

Some of Reagon’s proudest moments have included playing for her godfather Pete Seeger’s 90th birthday celebration at Madison Square Garden (2009), a benefit for Seeger’s environmental organization, Clearwater. She has also performed with the Freedom Singers at the White House in President Barack Obama and First Lady Michelle Obama’s tribute to the music of the civil rights movement.

Toshi Reagon’s honors include a 2009 Out Music Award, the 2007 Black Lily Award for Outstanding Performance, and a 2004 New York Foundation for the Arts award for music composition. She was one of several women honored by the National Women’s History Project for “amazing intelligence, talent, courage and tenacity [that testify] to the myriad ways that generations of women have moved history forward.”