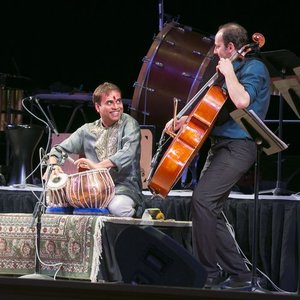 Mike Block is a pioneering cello player, singer, composer, and educator, hailed by Yo- Yo Ma as the "ideal musician of the 21st-Century".
Passionate about cross-cultural collaboration through music, Mike is committed to inspiring individuals and connecting communities. At home in a wide range of musical styles, through a multi-genre approach to composition, performance and education, he seeks to inspire audiences and empower musicians to find joy in the full world of music. Acclaimed by the NY Times for his "vital rich-hued solo playing", Block's solo performances offer a rich mixture of core classical repertoire with original compositions.

Mike is member of Yo-Yo Ma's Silk Road Ensemble (SRE), having joined in 2005 while a student at The Juilliard School. Touring extensively throughout the world with SRE, he has been featured as cello and vocal soloist, contributed arrangements and compositions, and earned a Grammy Award in 2017 for their album, Sing Me Home.

As a band leader, Mike has released multiple albums with various projects, including his latest release, Final Night at Camp, on the label Bright Shiny Things.

Sandeep Das is one of the leading Tabla virtuosos in the world today. Having established himself as India’s top Tabla maestro, he is one of the few Indian classical musicians to actively explore new contexts for his instrument beyond the music of his home country. Since his debut concert with Ravi Shankar at the age of 17, Mr. Das has gone on to perform with iconic artists such as Yo-Yo Ma and the Silk Road Ensemble and Paquito D’River at prestigious venues ranging from Carnegie Hall to the Royal Albert Hall. Performances for significant events such as the opening ceremony of the Special Olympics and the World Economic Forum, in addition to audiences such as the United Nations and the Queen of England, have established as a highly sought-after performer all over the globe. Mr. Das is also a prolific composer, and his compositions have been showcased all over the world–- his most recent piece, Vaishnavi, is currently on display alongside a statue of the Goddess Parvati at the Freer|Sackler in Washington D.C. As an educator, he is the founder of Das Tabla School and is frequently requested as an artist in residence at institutions ranging from K-12 schools to top universities such as Harvard and the Julliard School of Music.