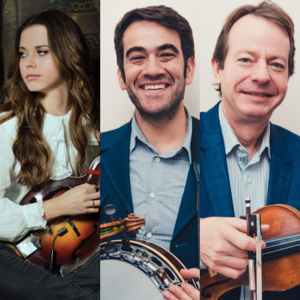 Thursday, November 21, 2019 - Please note: anytime meal options will not be available at concessions for this show. Beverages, popcorn, candy and grab and go items will be available.

For SRO shows at Hopewell Theater, the balcony is seated and seats are first come first served.

Sierra Hull
has been recognized from age 11 as a virtuoso mandolin-player, astonishing audiences and fellow-musicians alike. Now a seasoned touring musician nearing her mid-20s, Hull has delivered her most inspired, accomplished, and mature recorded work to date; no small feat. Weighted Mind is a landmark achievement, not just in Sierra Hull's career, but in the world of folk-pop, bluegrass, and acoustic music overall. With instrumentation comprised largely of mandolin, bass, and vocals, this is genre-transcending music at its best, with production by Béla Fleck and special harmony vocal guests Alison Krauss, Abigail Washburn, and Rhiannon Giddens adding to the luster. Hull speaks eloquently, in her challenging and sensitive originals, her heartfelt vocals, and once again breaks new ground on the mandolin. Enlisting bassist Ethan Jodziewicz (and Fleck on two cuts), and harnessing vocal contributions from Krauss, Abigail Washburn, and Rhiannon Giddens, Hull trusted her foundation of influences to support this artistic leap.  Months later she was taking home the Mandolin Player of the Year. After a near-decade of consecutive noms, Hull broke that last glass ceiling, becoming the first woman to win the prestigious title.  Of all the numerous awards and achievements Sierra Hull has earned, that one occupies a special place on the mantel. Then she took home a pair to join it, winning again in 2017 and 2018.

Hull has maintained a rigorous touring schedule, as well.  Even when off the road, she is frequently guesting with friends and legends, joining such icons as the Indigo Girls, Garth Brooks, and Gillian Welch, and performing at the Country Music Awards with Skaggs, Brad Paisley, and Marty Stuart.

She says she’s ready, now, for something new.  Currently in the midst of work for the follow-up to Weighted Mind, her next album will consist of all original songs.  Beyond that, there are tantilizing ideas she won’t divulge for collaborations and, perhaps, an all-instrumental record.  There is a plan, but not a timetable, which is just fine.

NOAM PIKELNY has emerged as the preeminent banjoist of his generation. He is a founding member of the Grammy-winning Punch Brothers and was awarded the first annual Steve Martin Prize for Excellence in Banjo and Bluegrass in 2010 in addition to IBMA’s Banjo Player of the year in 2014 and 2017. Universal Favorite (Rounder Records, 2017) is the fourth record Noam Pikelny has released under his own name, but it’s truly his solo debut. His previous solo efforts—including 2014’s landmark Noam Pikelny Plays Kenny Baker Plays Bill Monroe—were full-band affairs that revealed his abilities as a dynamic bandleader while reinforcing his reputation as an inventive accompanist – with both albums receiving Grammy nominations. Universal Favorite features only the man himself, playing lovely originals and covers that showcase his unique approach to the instrument and compositional flair. He recorded them live in the studio without accompaniment, coaxing a wide array of sounds and colors out of his instruments, embracing the challenges and exploring the new possibilities of the solo setting. And, for the first time in his career, Pikelny even sings. It turns out he has a striking deadpan baritone that conveys humor and melancholy in equal measure. This album, he says, is “is the most personal statement I’ve put forward. The setting couldn’t be more stark and I think it lays bare my musical core. Most importantly, it’s an incredibly honest solo album, in that there are honestly no other people on this record other than me.”

Stuart Duncan could easily be called America's favorite fiddler. Raised by folk musicians in southern California, Stuart took up the fiddle at age 7. Since then, he has chalked up a career that includes four Grammys, a slew of Academy of Country Music Awards, and nine titles as the International Bluegrass Music Association’s Fiddle Player of the Year. He was a founding member of the Nashville Bluegrass Band and is perennially one of Nashville’s most sought-after session musicians, performing on hundreds of recordings.

Stuart is known for his skill and imagination, his ability to shift easily from the most ancient sounding Appalachian tune, to some deeply jazz and funk-inflected contemporary melody. He is able to improvise perfect and utterly new ideas that are exactly what the musical moment requires, and he is able to do this at frighteningly fast tempos with perfect tone and intonation.

Now a multi-instrumentalist, with a staggering command of, not only the fiddle, but also, the banjo, the guitar, and the mandolin, Stuart Duncan has built upon his bluegrass roots to become an artist that defies categorization and surpasses the limits of any specific genre.  The consummate sideman, Stuart has lent his particular taste and tone to countless artists and projects.  Whether trading dizzying instrumental licks with the likes of Bela Fleck and Jerry Douglas, or adding complimentary fills for vocalists Alan Jackson and Barbara Streisand, Stuart has found a professional home both in the studio and on tour.  From Robert Plant to Panic at the Disco, Stuart's playing and influence can be heard among many of today's top hit-makers. In fact, though no one has a true count of how many recordings feature Stuart Duncan, the current estimate nears 900.

The most recent evidence of Stuart's cross-genre expansion is The Goat Rodeo Sessions, his collaboration with Chris Thile, Edgar Meyer and Yo-Yo Ma. This collaborative album, featuring compositions written by Duncan, as well as Meyer and Thile, was released in 2011. The ensemble played their first public concert in January 2012, which was streamed live to movie theaters across the United States. Goat Rodeo Sessions won the 2013 Grammy Award for Best Folk Album, granting Stuart his fourth Grammy, following two for The Nashville Bluegrass Band, and one for his participation on O Brother, Where Art Thou.

Despite the awards and accolades, Stuart Duncan remains one of the most humble men in the music business. A father of 3, he spends his time, while not on the road or in the studio, rebuilding rare instruments, hanging out with his wife of 25 years, Dieta, and backing up his fellow congregants during Sunday service. If you aren’t a music industry insider, Duncan’s the most famous fiddler you’ve never heard of. Just take a closer listen to your favorite music... chances are, that's Stuart on fiddle.

For SRO shows at Hopewell Theater, the balcony is seated and seats are first come first served.