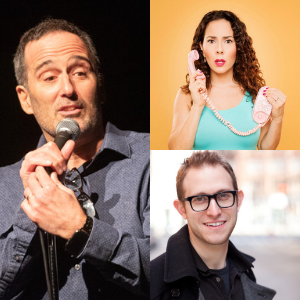 Get a baby-sitter. Leave the kids at home. This is Stand-Up for Grown-Ups.

ADAM OLIENSIS
In his stand-up, Adam explores the lessons in humility he’s learning from his wife and children, along with the adjustments being forced on him by being a grown-up. Having lived as a child in East Africa, studied martial arts in India, and languished spiritually in New Jersey, Adam is attuned to the absurdities that arise in the everyday, mining the ironies and silliness found in the most humbling situations (with which he continues to gain vast experience).

Adam’s debut comedy album, “Aged Whine” was released earlier this year and can be purchased at www.adamoliensis.com or at www.lohudcomedy.com

He co-authored the movie, The Pompatus of Love, with Jon Cryer (Best Comedy, Worldfest-Charlotte), in which he stars along with Mr. Cryer and Kristen Scott Thomas. His plays have been produced by Ensemble Studio Theatre, among other companies in NYC, as well as in LA and regionally.  As an actor, Adam has appeared on Broadway, Off Broadway, in Regional Theatre, in the movies, on TV, and in hundreds of commercials.

BRETT DRUCK
Brett Druck is best known for the viral success of his chivalry joke. He was a cast member and guest host on Laughs TV Show seasons 2 & 3 on FOX and HULU and you may have seen him on America's Got Talent, in NBC SeeSo's “SCHTICK OR TREAT: HALLOWEEN STAND UP SPECIAL” , mentioned in Rolling Stone,  or heard him on Pandora Comedy Radio. He frequently appears on the front page of Reddit and has had his jokes shared millions of times. He has also been featured in numerous comedy festivals including TBS's Just for Laughs Chicago, The Charleston Comedy Festival, The Andy Kaufman Award(Finalist), San Francisco Sketchfest, and Hoboken Comedy Festival (2015 Winner). He can be seen now performing in select cities across the U.S. and Canada on the Brewery and Winery Comedy Tour.

KYLE OCASIO
Comedian Kyle Ocasio has been performing stand up all over the country for well over a decade. She brought laughter to the US troops in eight different countries while performing with Armed Forces Entertainment in Europe and The Middle East.

Before heading to the Edinburgh Fringe festival where she debuted her stand up for an international audience, she was the face of Optimum TV's Soccer Mom Goals, a show with a comedic twist on "momentating" on the 2018 World Cup.

Rooftop Comedy released her debut album "Tell Mommy Your Name Again" which is in regular rotation on Sirius XM and in 2018 she recorded her second album with Rooftop, this time a collaborative piece entitled "Three's Comedy" with two other comedians. It was number two comedy album of the summer, just behind Jim Gaffigan.