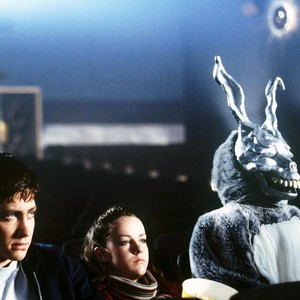 One Day Only! Friday, October 25th

Our friends at The Peasant Grill will be supplying a special dinner of a GHOUL-lash over Egg Noodles for this screening. The cost of the meal will be $20 and we will be taking orders up until October 18th after which point a limited number of orders can be taken through the box office so reserve your dinner today! Simply upgrade your ticket at check out or call our box office at 609-466-1964 for assistance.


Donnie (Jake Gyllenhaal) is a bright and charming high-school student who also has a dark and willfully eccentric side; he does little to mask his contempt for many of his peers and enjoys challenging the authority of the adults around him. Donnie is also visited on occasion by Frank, a monstrous six-foot rabbit that only Donnie can see who often urges him to perform dangerous and destructive pranks. Late one night, Frank leads Donnie out of his home to inform him that the world will come to an end in less than a month; moments later, the engine of a jet aircraft comes crashing through the ceiling of Donnie's room, making him think there might be something to Frank's prophesies after all.