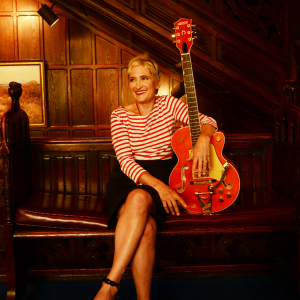 On Nostalgia Kills (out September 14on Jill’s own Pinko Records), the woman hailed by The New York Times for making “grown-up music for an adolescent age” turns her warm wit and poet’s eye on herself more than ever before, revisiting moments from throughout her life that made her into the person she is today. It’s an especially poignant look back at childhood —“exorcising some junior high school demons,”as she puts it. Looking back is a new experience for Jill Sobule. Ever since she first caught mainstream attention with her 1995 song “I Kissed a Girl”— the first song about same-sex romance ever to crack the Billboard Top20 (and no relation to the later Katy Perry tune) — she’s always pushed forward, exploring new sounds and subject matter with each passing album and refusing tobe pigeonholed by her early hits (which also include the ‘90s alt-rock anthem “Supermodel,” featured inan iconic scene in the film Clueless).Along the way, Jill has shared stages with the likes of Billy Bragg, Cyndi Lauper and Warren Zevon, written music for TV and theater, and been a pioneer in the art ofcrowdfunding, raising so much money for her 2009 album California Years that a then-unknown startup called Kickstarter came to her for advice. She’s also been active innumerous social and political causes, performing at prisons as part of Wayne Kramer’s Jail Guitar Doors project, playing dates with Lady Parts Justice’s “Vagical Mystery Tour,”and curating Monster Protest Jams Vol. 1, featuring protest songs byTom Morello, Billy Bragg, Boots Riley, Amanda Palmer, Jackson Browne and many other great artists —including Jill’s own “When They Say We Want Our America Back, What the F#@k Do They Mean?”, which traces the history of anti-immigrant sentiment in America.