This Really Happened... Storytelling at HT 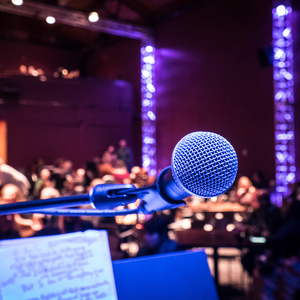 Join us for our ongoing series This Really Happened... featuring some of the most hilarious and moving storytellers on stage. With a rotating cast of storytellers, the show is always fresh. Audience members can also claim a spot in the show and share a "two-minute tale" at the open-mic at the end of each show, for up to six audience members. Hosted by Joey Novick, each show will be one hour long with no intermission, followed by the open mic segment of “two-minute tales."

Can't get enough of Storytelling and Comedy podcasts? Subscribe to our new storytelling podcast, This Really Happened...Storytelling at HT, now available on iTunes, Google Podcasts, Spotify, & Anchor! A new installment will be release each month.

Denise McCormack
Denise McCormack is a teller of all types of tales---for a purpose. Recently committed to telling it like it is and was - with true stories about growing up in NJ as a Polish, white girl - she offers vantages of the multi-faceted historical and familial contexts that surrounded and shaped them. They strike a nerve.

Ms. Kahaney was named Best Comedian in NYC by Backstage and Best female comedian NYC by the Manhattan Association of Cabarets. And even though she’s had specials on Comedy Central and HBO, her parents still wish she married a doctor!

Leslie Goshko is the host and creator of the monthly storytelling series, Sideshow Goshko, which has been hailed as a Time Out New York and New York Times "Critics' Pick", and also noted as “a well-programmed night” by the New York Times. Sideshow Goshko has been featured on TruTV’s Impractical Jokers, NPR’s Snap Judgment, and in The New Yorker.

A Manhattan Monologue Slam Champion, and contributing blogger for the Huffington Post, Leslie’s stories and comedy writing have appeared on Sirius XM, WNYC, New York Metro “Funny Page," and more. Her cabaret show "An Old-Fashioned Piano Party with Leslie Goshko" is heralded as a Time Out New York "Critic's Pick," and she served as the musical director for NY1 anchors Pat Kiernan and Jamie Stelter's live show at 92Y, "Pat and Jamie's NY."

Leslie has been featured on two albums: the full-length album for kids' band "Thunder and Sunshine" (of which she is a member) and on the GlasOnGlas EP "Silver and Violet."

She can regularly be seen in NYC behind the baby grand playing live piano karaoke at Sid Gold's Request Room and thanks to the support of many Internet voters, she performed with the cast of Hairspray on Broadway.

Mike Baldwin as "THE LEGENDARY WID" is "one of the funniest people to ever come from New Jersey." Since his humble beginnings in Cranford, NJ, THE LEGENDARY WID went on to become the undisputed Prince of Props and Puns! In fact, when you look up ..Prop Comedian.. in the encyclopedia, it says, ..THE LEGENDARY WID... He is also the subject of an award-winning documentary film entitled, ..WID,.. by Jason Ferraro and Brian Galla. From his sold-out shows at New York's The Bottom Line in the early 80s to his frequent TV appearances ever since THE LEGENDARY WID has always been an audience favorite. WID uses props and puns to hilarious effect. He has hosted TV shows such as VH-1..s ..Top 20 Countdown,.. and appeared on ..Stand-Up Spotlight... He has appeared on ..Make Me Laugh.. on Comedy Central and ..Comedy On The Road.. and ..Caroline..s Comedy Hour.. on A & E,.The ABC Comedy Club Special.. and ..30 Seconds To Fame,.. on FOX. WID also appears on the best selling DVD ..Laughing Out Loud - America..s Funniest Comedians.. along with Adam Sandler, Jerry Seinfeld, Ellen Degeneres, Jeff Foxworthy, Ray Romano, Drew Carey and Jay Leno.

At THIS REALLY HAPPENED, you get to see Mike without props.