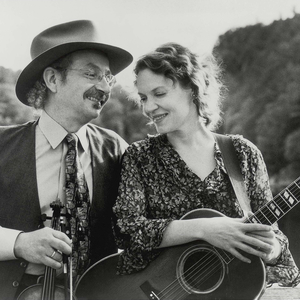 
He was a Bronx kid. She grew up in Washington State. He was raised on pop music of the 1940s and ’50s. She had a fondness for traditional fiddle music and ’30s and ’40s popular tunes. He hung out in Greenwich Village coffeehouses and roamed North Carolina and Tennessee in search of traditional players. She played clubs and colleges on the West Coast and took a liking to the jazzy sound of the Swing Era. Since joining forces—both artistically and romantically (the two would marry in 1991)—Jay Ungar and Molly Mason have become one of the most celebrated duos on the American acoustic music scene.

It started with a chance meeting in the late 1970s. Jay and Molly were each performing at the Towne Crier, a rural New York club. They hit it off musically and played together from time to time until Molly headed off to Minnesota to work in the house band of a new radio show: Garrison Keillor’s A Prairie Home Companion. Meanwhile, back in New York, Jay put together a band with fellow fiddlers Evan Stover and Matt Glaser and guitarist Russ Barenberg. When Fiddle Fever, as the collaboration was called, needed a bassist, Molly signed on. The group recorded two classic LPs, now available on CD as The Best of Fiddle Fever (Flying Fish Records).

The early ’80s also saw the beginning of Jay’s Ashokan Fiddle & Dance Camps, a world-renowned destination for enthusiasts of American music and dance traditions. Several years later, Molly became a full partner in designing and running these programs, which are still going strong.

1984 found Fiddle Fever band members Matt Glaser and Russ Barenberg working with a young filmmaker on a documentary called The Brooklyn Bridge. They gave Ken Burns a copy of Fiddle Fever’s second LP, Waltz of the Wind, which included Jay’s Ashokan Farewell. Burns was so taken with the evocative and haunting melody, he used it in his next film, Huey, about Louisiana Governor Huey Long, and he wound up inviting Jay and Molly to provide music for many of his projects. The high point to date of this long relationship was the selection of Ashokan Farewell as the main theme of Burns’ landmark PBS documentary The Civil War. The result: an Emmy nomination for Jay and a Grammy for the soundtrack album. And the tune seems to have taken on a life of its own. Now considered an American “folk” classic, it is played by fiddlers and classical musicians worldwide. In the British Isles, a recording of Ashokan Farewell by Her Majesty’s Royal Marines has remained high on the classical charts for several years. It has been performed by major orchestras, and has been recorded by artists from Mark O’Connor to Pinchas Zuckerman, James Galway to Charlie Byrd, Jerry Garcia, David Grisman and The Osborne Brothers to Polka King Jimmy Sturr.

After signing with Angel Records in 1991, Jay and Molly—in collaboration with baritone Thomas Hampson and pianist David Alpher—released American Dreamer, a collection of the songs of Stephen Foster. They followed with Waltzing with You, an elaboration on their score for the film Brother’s Keeper, a Sundance Film Festival prizewinner. Perhaps the duo’s best-known composition is the title track of The Lovers’ Waltz, an album of romantic fiddle music from Appalachian, Scandinavian, Celtic, Klezmer and Swing traditions. The CD also features a medley of melodies written by composer James Horner—ones that Jay had previously performed with the London Symphony in Horner’s score for the Sony Tristar filmLegends of the Fall. Harvest Home, Jay and Molly’s 1999 release on Angel Records, culminates in their 20-minute orchestral work, The Harvest Home Suite, in which they are joined by the Nashville Chamber Orchestra. In 2002, Jay and Molly produced, arranged and performed on A Song of Home, a collaborative recording for RCA, with flutist Sir James Galway, mandolinist Peter Ostroushko and bassist Steve Rust. Now, with Relax Your Mind (Angel Records), Jay and Molly, with their band Swingology, take a slightly different direction: American dance music with a focus on country blues and swing. Included are more of the beautiful waltzes that have become their signature pieces.

Quite the odyssey for the West Coast girl and the kid from the Bronx.