Til Death Do Us Part... You First - One Man Show with Peter Fogel 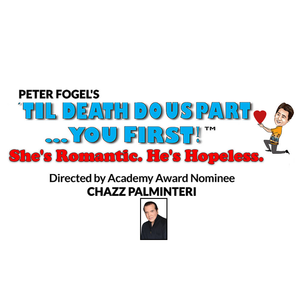 Start the Year off with An Evening of NON-STOP LAUGHS for Single, Divorced, or Devoted Couples! (See this show before it heads to OFF-BROADWAY)

Eternal Bachelor Peter Fogel has major commitment issues as the love of his life has just broken up with him on Valentine's Day! Sensing his own mortality he decides to revisit the scene of all his romantic disasters with a Special Visitor who mentors him on the meaning of true commitment.

And with that decision, Fogel brings you his autographical tale of a comedian’s Quixote quest to finding and surrendering to the one woman who can transform his life: Fogel's hysterical and critically acclaimed multi-media solo show, ‘TIL DEATH DO US PART…YOU FIRST! is Directed by Academy Award Nominee and Three-Time Emmy Award Winner CHAZZ PALMINTERI (A Bronx Tale, The Usual Suspects, Bullets Over Broadway), who will be present at the show!

Fogel laments to his audience: “The longest relationship I’ve ever had in my entire life... is with Amazon's Alexa!”

Young or old, divorced or married…if you’ve ever been single (and that’s everyone) and want to experience (again) the feeling of finding that special person to spend the rest of your life with, then you’ll want to fasten your seat belt for 75 minutes of non-stop laughs with Peter Fogel’s ‘TIL DEATH DO US PART…YOU FIRST!

Miami Art Zine says "... A hilarious cross between "Men Are From Mars/Women Are From Venus and "Defending the Caveman!"

The NY Post says... “the single’s man, single man… who tells such hilarious stories about being single in the city… one wants to go out and find him a suitable mate!”

The Palm Beach Arts Post... "Fogel’s ingratiating delivery and inclusive approach to the subject, plus some genuinely funny observations, make ’Til Death an entertaining evening out!"

"A hysterical look at the complexity of relationships, love, & marriage - proving you can find your soulmate at any age." Dr. Diana Kirchner, Best Selling Author of "Love in 90 Days" CBS Morning Show, Good Morning America