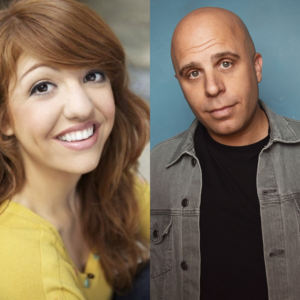 Jackie Byrne is a stand-up comic, actor and host who is known for being super fun, sassy and quick witted! She's "the girl next door" with an expressive face and a Jersey attitude. Jackie brings her bubbly and spontaneous energy to audiences all over the country. She just recently filmed #thatmovieaboutnjcomics directed by the brilliant comic, Bonnie McFarlane and can be seen as "Beth" in the feature film, Seclusion. She has studied and performed improv and sketch comedy at The Upright Citizens Brigade in New York City and her writing and acting have been featured in sketches on FunnyorDie.com and Buzzfeed. Jackie lives in the Dirty Jerz with her mensch of a husband while she continues to pay off her B.F.A. in Theater. She holds Reverend status from The Universal Life Church (a.k.a she can marry you) and a grudge for never being cast as "Annie" at any point in her childhood.

Also hailing from NJ is comic, podcaster, and actor Joe Fernandes. When he is not escaping reality by hanging with his Welsh corgi on hiking trails, he can be found in comedy clubs making fun of his unrelenting confusion with life. Joe’s open book approach to comedy has an honest point of view that any audience can relate to.