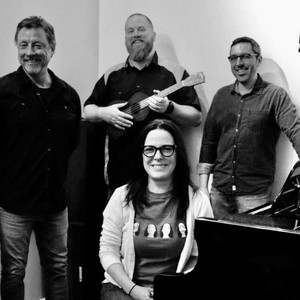 Join us to mingle with other film lovers and celebrate the best film of 2019 at HT’s Oscar party! Guests are encouraged to wear their finest glam attire or movie costume to celebrate the evening and can enter to win their own award. See the award show on the big screen with friends and enter to win prizes in our games and contests below.

Doors open at 6:00pm for live music from or inspired by the Oscar nominated films, performed by Tinsel Town Rebellion. The Oscars pre-show begins at 7:00pm. The Oscars award show begins at 8:00pm. Our full concession will also be open for dine-in meals and desserts to order.

The event's host and emcee is Erica Rubine, who will be accompanied by Matt Wiley, Alex Palilonis, and Brian Dougherty in the band TINSEL TOWN REBELLION, who will perform the night's live music.

Alex, Brian, and Matt are longtime musicians active in the local music scene. They can often be seen at John and Peter’s in New Hope and other local venues playing with The Mayflys and RIPS.

Erica Rubine has her Ph.D. in Folklore from the University of Pennsylvania. As a folklorist, Erica is inspired to document, showcase, and celebrate the creative work people engage in. She teaches English, Film and Media Studies, American Studies and Gender and Sexuality Studies courses at Rider University and is an on-air personality at Princeton’s WPRB 103.3 fm. On her weekly radio show, The Sonic Bloom, Rubine has interviewed writers, academics, poets, musicians and film directors such as Robyn Hitchcock, Redd Kross, The Melvins, John Doe, Director Amy Scott and poet Paul Muldoon. Erica grew up in a musical family, singing a wide repertoire, from folk songs to jazz to the great American songbook. She loves to sing and collaborate with other artists. As one of Erica’s favorite film characters, Maude in Harold and Maude says, “Everybody should be able to make music. That’s the cosmic dance!”


Also see our screenings of the Oscar Nominated Short Films: Animation, Live Action, and Documentary leading up to the awards!