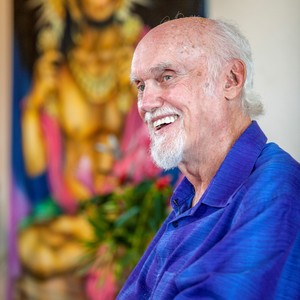 Hopewell Theater pays tribute to spiritual leader Baba Ram Dass, born Richard Alpert, who recently passed away at the age of 88. Ram Dass was an inspiration for and will continue to inspire HT's ongoing series, The Art Of Living Well.

Becoming Nobody (2019) truly represents the core arc of Ram Dass’ teachings and life. His ability to entertain and his sense of humor are abundantly evident in a conversation that brings us around to address the vast question of ultimate freedom. Becoming Nobody is the quintessential portal to Ram Dass’ life and teachings.

Ram Dass has led a multifaceted life. Whether as Richard Alpert, the eminent Harvard psychologist, or as Ram Dass, who serves as a bridge between Eastern and Western philosophies, he has defined a generation of inner explorers and seekers of truth and wisdom. Through his turns as scion of an eminent Jewish family from Boston, rock star Harvard psychologist, counter-culture rascally adventurer, Eastern holy man, stroke survivor and compassionate caregiver, Ram Dass has worn many hats on his journey, the narrative of which is revealed in this film.

In Becoming Nobody, historic clips balance an engaging conversation with director Jamie Catto. We come to understand how our old roles and disguises become increasingly burdensome. The film captures a loving man full of joy, wit, honesty and wisdom, at ease in conversation while sharing his considerable pains and pleasures. The life experiences that have freed him from the attachments of his ‘Somebodyness’ have transformed him into the radiant soul who now inspires a new generation.