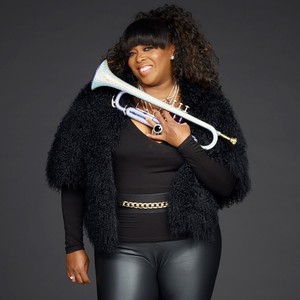 One of the greatest trumpet players in music has just bedazzled her entire trumpet in ten thousand three hundred Swarozski Crystals in preparation for her fifth solo album entitled Taking It Back.

In addition to preparing for a new music release, Syreeta currently serves as a committee member/Gala chair for Lincoln Center for the Performing Arts Young Patrons. Syreeta is often a red carpet guest within the Lincoln Center Community Galas as well as Hype Magazine Events.

Amongst Thompson’s other projects she remains focused on paying it forward to the next generation of female musicians with a documentary entitled Blow Yo Horn: Making Music In a Man’s World. This documentary profiles female musicians, music producers, instrumentalists, and songwriters who have yet to have commercial success.

In 2019, longtime multi-instrumentalist Bill Flemer launched a series of Monday night music evenings at The Peasant Grill in Hopewell. Eventually, Bill dragged Michelle Klein - owner and baker at the restaurant - out of the kitchen to sing. Soon, an early version of Mine Road, called Michelle's Blues Band, performed at The Peasant Grill and then landed a gig at Hopewell Theater as house band for Your Stage at Any Stage open mic events.

Drawing from various musical backgrounds and influences, the group enjoyed an immediate synergy, developing a repertoire of standards, blues, and torch songs with the occasional pop tune thrown into the mix. The band meets and rehearses regularly in an old farmhouse on Mine Road in beautiful Hopewell Township. Thus the name! There’s enough space to feel the music, and a friendly spirit you can feel on stage.

Get tickets to see the Blow Yo Horn documentary at HT here!
Get merchandise here!