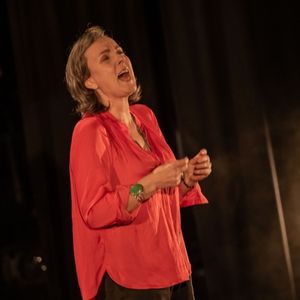 Friday, September 16
"Karan Casey’s latest album is revelatory. She’s always been a singer of songs that tell a story and show their muscle…This is a strikingly three-dimensional work that stands the test of intensive and repeated listening with ease. A vivid and dazzling snapshot of Casey invincible, at the height of her powers.” - Siobhán Long, Irish Times

“Casey’s voice is among the loveliest in folk music and she’s a wonderful interpreter of both contemporary and traditional material.” - Boston Globe

“Karan Casey's latest solo venture is a thing of rare beauty.” - Sing Out

"The most soulful singer to emerge in Irish traditional music in the past decade." - The Glasgow Herald

“If ever any doubt existed about who's the best Irish traditional woman singer today, "Exiles Return" sweeps aside all pretenders…Karan Casey has no vocal peer.” - Irish Echo

Sample the music on Bandcamp or Spotify | Get merchandise here!

She has partnered with two time Grammy winning producer Marc Swersky for all of her recordings to date: “Mama Told You…”; “Turning Tides…”; “A Little Christmas Kindness”; and “Know You’re Enough” - Helen’s original songs tell stories of life, love, loss and legacy.

Helen leads two bands in NJ – Shenanigans and The Shanakees (Gaelic word for "storyteller") - in the style of "AmeriCeltiCana" - Americana with a Celtic twist!

At last check, James has logged over 2500 gigs in the last few years in over 200 different venues from Maine to New Orleans including The White House in Washington DC.