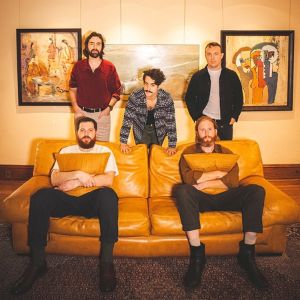 Thursday, September 22
“The RT’s are the pizza of bands. You’re always in the mood for it.” - Rachael Price (Lake Street Dive)

They say it takes nearly a decade for a wine to mature. The same could be said for The RT’s (formerly The Rad Trads). If you caught their brand of raucous, beer-soaked trad jazz and blues in the early days, you'll see the same ingredients (boisterous horns, impassioned vocals, and a driving groove) but a new flavor, and the kind of maturity and subtlety that only comes with time.

That’s why it felt like the right moment to change the band’s name, Patrick Sargent (vocals, saxophone, keys) explains:

“We made this album that felt more authentic and honest than anything we’d ever done, but it didn’t sound like a record by a band called The Rad Trads. So it only felt right to take ownership of this next step in our evolution and abbreviate the name.”

Their forthcoming self-titled album – out Oct 22 – celebrates these changes. While the world was going through difficult times in 2020, the band – Sargent, Michael Harlen (bass, vocals); Alden Harris-McCoy (guitar, vocals); Michael Fatum (trumpet, vocals) and Jamie Eblen (drums) – took the opportunity of downtime to produce new material. They were able to find solace in a greater collaborative energy and discovered a new creative process.

“This record was different from our previous records in that the arrangements were made for the studio,” Harlen explains. “In the past, our tunes would reveal themselves on the road; learning and tweaking them as we played in different rooms each night. Then, when we got into the studio, we would record a version pretty faithful to what we would have played the night before in a bar. But this time around our producer Chris Peck encouraged us to really focus on pre-production and to approach the arrangements through a studio lens. The result is less about raw energy and more about finesse.”

Sample the music on Bandcamp or Spotify | Get merchandise here!

Opening for The RT's is Nate Walker, a performing artist, songwriter, and producer who writes and records music in his studio space in Frenchtown, NJ.

Over the years, he has opened for Ben Folds, Sonic Youth, Don McLean, and Butch Walker among many others. He has been coast to coast as a solo artist, a lead singer, and a tour manager for national acts.

Nate has had the humbling fortune to work with legendary producers Phil Ramone and Jack Douglas, songwriter Claude Kelly, and record and perform with R&B artist Jay Sean. His instrumental compositions have also been featured on MTV and Netflix.