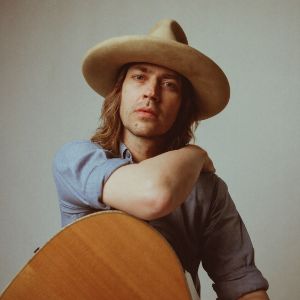 Sunday, November 6
Making his solo bow with 2002's The Instigator, most of Rhett Miller's solo albums have been dominated by cool, melodic pop tunes with a drier and more confessional bent than his work with the band, though 2012's The Dreamer explored a middle ground between his pop and alt country sensibilities, and the 2011 set The Interpreter: Live at Largo revealed he's a sure hand with other people's songs.

Strictly speaking, Miller launched his own career before the Old 97's were formed. He recorded his first solo album, a series of acoustic folk songs entitled Mythologies, in 1989. Future Old 97's bassist (and a solid songwriter in his own right) Murry Hammond produced the album, and their partnership later blossomed into a full-fledged band.

While releasing a string of well-received albums with the Old 97's, Miller and Hammond also performed together as the Ranchero Brothers, a two-man acoustic duo that was originally launched as a means of testing new music for the Old 97's in front of a live audience. The Ranchero Brothers developed their own distinct following, although no albums resulted from the project.

Taking time off from the Old 97's, Miller began recording his first major-label solo effort in February 2002, this time with the help of producer/multi-instrumentalist Jon Brion. The Instigator appeared nearly seven months later, followed by a tour with ex-Crowded House frontman Neil Finn in early 2003. Miller then returned to the studio with the Old 97's, squashing worried rumors that he planned to halt the band's career and focus on his solo efforts. He did, however, find time to balance the two projects, and his second solo release, The Believer, was issued by Verve in February 2006.

After returning to the studio with the Old 97's for 2007's Blame It on Gravity, Miller continued his juggling act by recording another solo album. The self-titled record appeared in 2009 courtesy of his new label, Shout! Factory. His next two solo albums, 2010's The Interpreter: Live at Largo and 2012's The Dreamer, were both released by Miller's own Maximum Sunshine label.

After releasing one of the Old 97's' strongest albums in years with 2014's Most Messed Up, Miller took a new turn in his solo career with 2015's The Traveler, which featured backing from the band Black Prairie (which includes several members of the Decemberists) and a guest  appearance from Peter Buck of R.E.M. Following more recording and touring with the Old 97's,  Miller returned to Brooklyn, New York, where he cut the 2018 album The Messenger with  producer and multi-instrumentalist Sam Cohen, who previously worked with Apollo Sunshine  and Yellowbirds. The album was released by ATO Record.

Sample the music on Spotify | Get merchandise here!
As of September, 2022, patrons and talent are no longer required to wear a mask inside the theater or show proof of vaccination or a negative test. Masks are still strongly encouraged. Please note: By visiting Hopewell Theater, patrons voluntarily assume all risks related to exposure to any infectious disease, including but not limited to COVID-19. HT reserves the right to change vaccination check, testing protocols and/or mask policies due to the unpredictable nature of COVID-19 and/or if by the request of an artist. Please refer to your show-specific pre show email for more details.