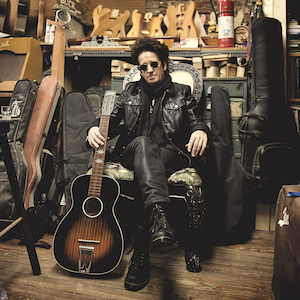 Willie has toured across the U.S. with The Who and has sung with Bruce Springsteen and The E Street Band. As the induction program from the Buffalo Music Hall of Fame says: “His live performances are legendary.” In the summer of 2017 Willie Nile released his 11th studio album Positively Bob – Willie Nile Sings Bob Dylan to rave reviews. He is currently bringing his electrifying live show to audiences worldwide - don't miss him!

"Better than most performers have to offer by far." -- Rolling Stone

“Willie’s so good I can’t believe he’s not from New Jersey!” – Little Steven

“Crossing the power of the Clash with the social consciousness of Woody Guthrie...he’s stronger than ever!” – The Morton Report

“Willie Nile is a great artist. If there was any justice in this world, I’d be opening up for him instead of him for me.” Lucinda Williams

“He’s a rocker’s rocker, protégé of the famous.” -- USA Today

A recent work, “ACROSS THE NIGHT” was written for the SS United States Conservancy to help raise awareness of the historic ship’s fate performed at the Union League in Philadelphia.

“One of those rare singer/songwriters who has seemingly never written a less-than-
good song...” John M. Borack, Goldmine Magazine

“It is always a treat when Marc Jonson releases a new song, simply because he's one of the best damn singer-songwriters on the planet.” Robbie Woliver, New York Music Hall of Fame