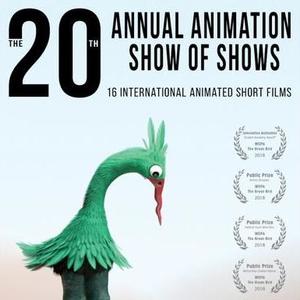 Opens Saturday, December 29! Crybaby Matinee on Thursday, January 3 at 11 am!

Returning to theaters across North America this fall, the ANIMATION SHOW OF SHOWS will present 15 thought-provoking, poignant, and very funny animated shorts from around the world. In a year when the best and worst of human nature has been on constant display, the works in this year’s show remind us of both the universality of shared ideals, as well as the diverse challenges we face.

“Animation is such a flexible and open-ended medium that it lends itself to exploring the innumerable aspects of what it means to be human,” says founder and curator Ron Diamond. “And this year’s program, as much as any of our past presentations, really illuminates human strengths and foibles, and the bonds that unite us across cultures and generations.”

The show includes 15 films, four of which have qualified for Academy Award® consideration *. The complete lineup, in order of appearance, is:

Directed by multiple filmmakers.
Runtime: 98 mins
Rated: This program is not rated, however we recommend children under 13 are accompanied by a parent or guardian. Please call our box office at 609-466-1964 for more information.